It is not unusual to see The Savoy Cocktail Book on a shelf behind the bar in a craft cocktail establishment. Many of these cocktails aren’t made in bars anymore (and one wonders how often they were made at the Savoy.) Some of them, like Bunny Hug Cocktail, have humorous notes following them:

The exact same recipe is listed later in the book with a different name and note:

How could I resist?

Right away I could tell this wouldn’t be well balanced. The combination of gin and whiskey in a cocktail raises an eyebrow and absinthe is as dominant an ingredient as Fernet Branca.  But still, I had to try it.

It’s not terrible, though it is very dry.

The gin and whiskey pretty much disappear in the absinthe. I figured the whiskey would get lost at a mere 86.6-proof to the absinthe’s 106-proof. If I was to make this again, I’d use a cask strength whiskey.  I might also try it with Scotch since the Savoy is in England and the recipe doesn’t specify.

As for the gin, I would try something either Navy strength or perhaps an Old Tom to counter the dryness of the absinthe. Or maybe try genever, though probably not with Scotch.

While I probably won’t try it again, it was an interesting experiment. For science!

In December 2011, I was asked by my brother-in-law and his fiancée to write a cocktail menu for their wedding. Their wedding was this past weekend and I’m pleased to say it turned out pretty well.

The lovely couple wanted classic cocktails that were whiskey or vodka based. The idea was that not everyone wanted whiskey and many people enjoy vodka. I convinced them to add gin as there aren’t so many classic vodka cocktails and if someone wanted a vodka “martini,” the ingredients would be there for that. Further discussion led to the inclusion of sparkling drinks as well.

The drinks also had to be easy to make as the catering staff wouldn’t be craft bartenders. An informal survey of friends found that people generally don’t trust wedding bartenders to make a good cocktail. Guests tend drink straight spirits, highballs (gin and tonics, whiskey and ginger ale, etc.) or opt for beer or wine. One friend’s response was, “Never a Manhattan, as it will not be good enough.” Feel free to leave a comment of what you drink at weddings or in other open bar situations.

I set out to curate of a list of simple (or at least hard to screw up) whiskey, gin or sparkling wine based cocktails with no more than three or four ingredients. After scouring a dozen cocktail books and at least as many websites and extensive recipe testing, I narrowed it down to a dozen or so drinks of which the bride and groom selected eight. My final list: 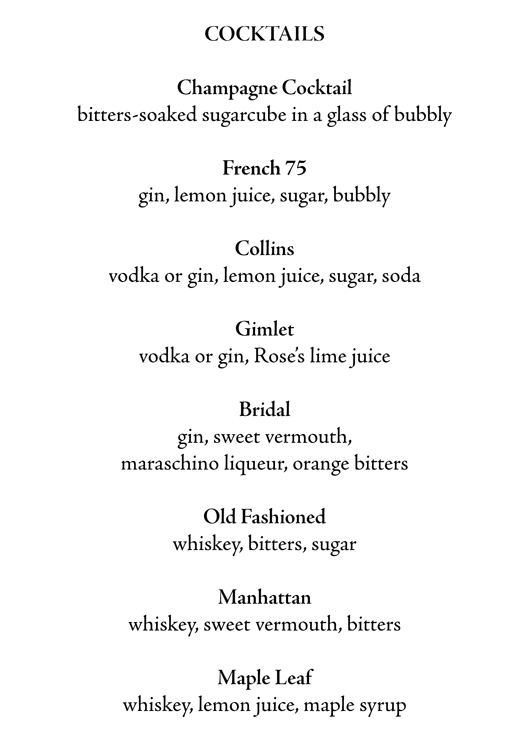 The French 75 was requested by the bride. The Maple Leaf was also a request by the bride and groom as it was the drink they had enjoyed throughout the previous year. The Bridal was a late addition found in Robert Hess’ The Essential Bartender’s Guide

, which I had received for my birthday a few weeks before the wedding. The Collins and Gimlet were the ways to get vodka into the menu. (The Moscow Mule was not chosen as I was trying to limit the number of juices needed.)

Of course you can’t just write a menu, you have to write out instructions for the caterers. This is easier said than done. Do you have any idea how many recipes exist for the French 75? I found that no two were the same. Ultimately, I modified the best one I found from Jim Meehan’s wonderful The PDT Cocktail Book: The Complete Bartender’s Guide from the Celebrated Speakeasy

. (While that recipe is my favorite, I thought it might look a bit small in a Champagne flute so I added another ounce of bubbly which still tasted decent.) Also, not knowing exactly which brands of spirits or mixers would be on hand, I couldn’t tailor the recipes to particular flavor profiles.

If you’re interested, here are the drink recipes as a pdf.

Once I had sent the menu and recipes to my brother-in-law, it was out of my hands.
Here’s what went wrong:

While this may sound like a list of crimes, everything turned out fine and I was probably the only one to notice. I heard the next day that a few people attempted to try them all, which is sweet, but ill-advised. Everyone was happy with their drinks, particularly the bride and groom. And that’s the point.

I can’t overemphasize my love for Cocchi Americano. Regardless of appropriateness, it’s one the first ingredients I reach for when I’m creating new cocktails and variations. Here, I’ve tinkered with two of the most iconic cocktails, the Manhattan and Martini/Martinez. I’ve got them all Cocchi-ed up and also fancied or improved (I can never remember which is which) with some pastis.

The whiskey variation is almost a cross between a Manhattan and a Sazerac. Actually, the most similar thing I could find at CocktailDB was the Satan Cocktail. Garble those three names together enough and you kind of get the…

Switching the rye for gin, the Angostura for orange bitters and the lemon peel for orange peel gets you the…

To find out why this one is so named, inhale sharply through your mouth after swallowing a sip.

Cherry Heering is another ingredient that I’m late to the party in utilizing. It’s a Danish cherry liqueur used in many classic cocktails including the Singapore Sling, Blood & Sand and one of my favorites, Remember the Maine.

When approaching the creation of a Heering cocktail, I decided first that my base spirit would be gin. Originally, I used what we call around here the Boudreau ratio. While the results were pleasing, I found it didn’t quite fill my cocktail glasses and coupes quite enough.  I also tried Punt e Mes as the vermouth component. Creating the drink in July, this proved a bit too wintry. (Remind me to try it again in 6 months.) I thought dry vermouth, but I didn’t want a cherry flavored martini. My solution was to go the perfect route, which in cocktails is equal parts sweet and dry vermouth. Hence:

Finally got a bottle of Cocchi Americano and I wish I’d gotten it sooner.

Peridot is my birthstone, which I hate. But I really enjoy this cocktail.